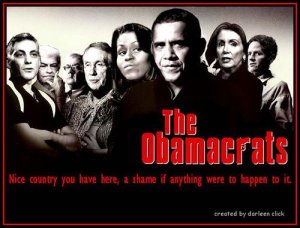 Well, sort of.  Chuck Todd reports for NBC that his sources at the White House think that Harry Reid and his caucus haven’t done enough to reach out to the House Republican leadership.  Having Joe Biden lead a meeting is more a facilitation or mediation rather than seeing a need for presidential leadership, and that Barack Obama’s offer of $6.5 billion in cuts was merely an ice-breaker.

The shot here is actually rather apropos.  Leadership of both parties have openly complained about the lack of leadership on the budget over the last couple of weeks.  John Boehner hadn’t even heard from Obama until the Speaker of the House told reporters about the Silence of the ‘Bams, at which point Obama finally talked to Boehner on the phone for a few minutes.  Senate Democrats have started grumbling about the lack of leadership and engagement from their President, a problem they didn’t seem to mind while failing to produce a budget while they held the majorities in both chambers of Congress.  The lack of direction makes it more difficult for Harry Reid to keep his caucus united, especially when many of them face tough re-election battles in red states next year.

Thus we have the Obama version of leadership — sending a second in his place to do and say nothing, while arguing that the budget isn’t their problem at all.  Empty podium, indeed.

Five senators from the Democratic side of the aisle have already decided to hang ’em up after this term. Each has his own reasons, but it mostly boils down to this: For some senators, a job in the “most exclusive club” is not worth the hassle anymore.

“It’s about campaigns,” Sen. Joe Lieberman (I-Conn.), a retiring member of the Democratic Caucus, told POLITICO. “It’s about both the unremitting — that’s a bad word to use — about the constant pressure to raise money and travel all over the country doing that and the nastiness of the campaign. … I have no second thoughts about it.”

Lieberman, who lost a 2006 Democratic primary only to win in the general election as an independent, faced a tough path to win reelection. And he’s 69. Democrats could well lose the Senate in 2012 anyway, meaning he would lose his chairmanship of the Homeland Security and Governmental Affairs Committee.

END_OF_DOCUMENT_TOKEN_TO_BE_REPLACED

Rep. John Shimkus (R-IL) pins down HHS Secretary Kathleen Sebelius on one of the most controversial budget tricks in ObamaCare — the $500 billion cut in Medicare that supposedly goes for both cost control and to fund other parts of the program.  Medicare’s own actuary blew the whistle on this sleight of hand in August of last year, which makes this admission by Sebelius a no-brainer:

In her first appearance before the House Energy and Commerce Health Subcommittee since the health-care law passed, Kathleen Sebelius responded to a line of questioning by Republican Rep. John Shimkus of Illinois about whether $500 billion in Medicare cuts were used to sustain the program or pay for the law.

END_OF_DOCUMENT_TOKEN_TO_BE_REPLACED

Arid Uka’s Facebook friends list was a “Who’s Who of the German Islamist Scene.”
March 4, 2011 – by John Rosenthal

According to the German public television broadcaster NDR, Arid Uka, the 21-year-old who shot to death two American servicemen at Frankfurt Airport on Wednesday and wounded two others, has admitted to shouting “‘Allah Akbar’ six or seven times” during the attack. An NDR press release cites Uka’s own statements to German investigators as contained in a German police report.