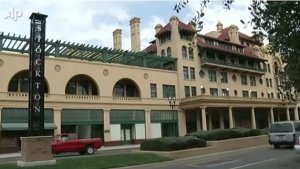 STOCKTON, Calif. (AP) — City leaders seeking a way to dig out from under massive debts have taken a step toward making Stockton the nation’s largest city to file for bankruptcy.

However, thanks to a new California law, the City Council’s move also could be the first step toward avoiding such a dramatic move.

Under the state law, municipalities considering bankruptcy must first seek mediation with creditors, with the goal of settling debts without filing for Chapter 9 protection.

Dozens of residents attended Tuesday’s six-hour council meeting to oppose the vote to enter mediation, saying they feared it would push Stockton further into trouble. The river port city of 290,000 already has the second-highest foreclosure rate in the nation and one of the highest crime and unemployment rates.

“If they vote for mediation, it is the first step towards bankruptcy,” former City Manager Dwane Milnes told KCRA-TV. “That means 1,000 people could lose retirement benefits.”

Stockton will be the first city to test the state law, Assembly Bill 506, which is less than two months old. It requires local government agencies to undergo mediation or hold a public hearing and declare a fiscal emergency before filing for bankruptcy.

In 2008, Vallejo became the biggest California city to file for bankruptcy, and it emerged from bankruptcy last year.

END_OF_DOCUMENT_TOKEN_TO_BE_REPLACED

(CNSNews.com) – Former Massachusetts Gov. Mitt Romney, who is seeking the Republican presidential nomination, said on Tuesday that the base of his party is easily excited by “outrageous” rhetoric.

“It’s very easy to excite the base with incendiary comments,” Romney  told reporters.

“We’ve seen throughout the campaign that if you’re willing to say really outrageous things that are accusative and attacking of President Obama, that you’re going to jump up in the polls,” Romney said.

END_OF_DOCUMENT_TOKEN_TO_BE_REPLACED

Democrats in Lansing, Mich., are nowhere near the far end of the liberal-o-meter as are Democrats in San Francisco, Calif.

So while Rick Santorum is taking heat for encouraging Democrats in Michigan to vote for him in Tuesday’s primary, he is actually using a playbook that the GOP should adopt in the general election.

And that is:  Pit “working class” Democrats against the extreme radicals who populate the activist wing of the Democratic Party.

Rank-and-file union members, for instance, are just as disgusted with President Obama’s decision to punt on the Keystone pipeline as are conservative Republicans around the country.

“Instead of celebrating their victory by hugging a tree, they should hug a jobless construction worker because they’re the ones who are going to need it,” fumed the Laborers’ International Union of North America.

“Once again the President has sided with environmentalists instead of blue-collar construction workers, even though environmental concerns were more than adequately addressed,” they added.

END_OF_DOCUMENT_TOKEN_TO_BE_REPLACED

The suspect in a shooting rampage at an Ohio high school that killed three and wounded two others will remain in detention, a judge ruled at a hearing Tuesday.

The court identified the suspect as T.J. Lane, and said that prosecutors have until March 1, 2012 to formally charge him.

He will be detained for 15 days, Judge Timothy Grendell ruled.

Authorities had not yet identified Lane citing legal reasons, but plan to do so in a press conference later Tuesday.

A lawyer for the suspect’s family had earlier identified him to a Cleveland television station as a 17-year-old junior at the high school who has been described by fellow classmates as an outcast.

END_OF_DOCUMENT_TOKEN_TO_BE_REPLACED

In A Brokered Convention, Who Will Control The Brokers? 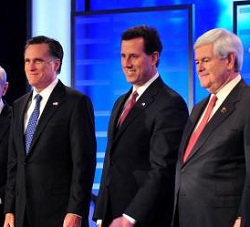 Here’s why tomorrow’s Michigan primary is so important: it’s about establishment confidence in Mitt Romney and the last outside chance of getting another entrant in the race.

There are, as I’ve noted previously, a number of different types of “establishment” vs “grassroots” divides in the GOP, but you don’t have to have any particular definition of ‘establishment’ to recognize that Romney’s candidacy leans heavily on the support he draws from traditional ‘establishment’ or ‘insider’ sources: money from big-dollar fundraisers, endorsements from big-name elected officials, and covering fire from right-leaning journalists at major mainstream publications and conservative journals. Romney has depended, time and again, on his ability to get out of trouble by having the resources to go more negative than whatever opponent he’s targeting: more money to dump on negative ads and a bigger chorus of voices amplifying those attacks.

Aside from Mormon support – which is somewhat sui generis to Romney – some of Romney’s structural support comes from people who know him personally or identify with him as a fellow wealthy businessman; some comes from people who fear running a bold-colors conservative; and some comes from those who, whether or not they’d support a conservative in theory, fear Rick Santorum and Newt Gingrich as electoral liabilities, Santorum for his overly outspoken social conservatism, Newt for his long train of baggage. (It’s obviously Santorum represents a serious threat to Romney at present.)

END_OF_DOCUMENT_TOKEN_TO_BE_REPLACED

In the poll, Obama lags the two leading Republican rivals in the 12 states likely to determine the outcome of a close race in November:

•Former Massachusetts governor Mitt Romney edges Obama 48%-46% in the swing states. Nationwide, they are tied at 47% each.

The battleground states surveyed include Michigan — where Tuesday’s primary has become a critical showdown between Romney and Santorum — as well as Ohio and Virginia, which vote next week on Super Tuesday. The other swing states are Colorado, Iowa, Florida, Nevada, New Hampshire, New Mexico, North Carolina, Pennsylvania and Wisconsin.

END_OF_DOCUMENT_TOKEN_TO_BE_REPLACED

By David A. Patten

END_OF_DOCUMENT_TOKEN_TO_BE_REPLACED 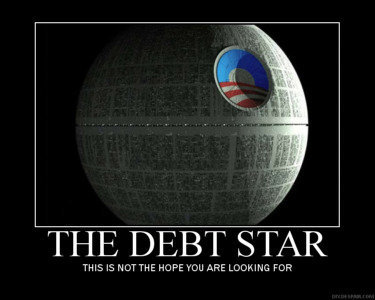 The $16.4 trillion debt ceiling could be reached just weeks after Election Day, according to a new report.

The analysis raises the possibility that lawmakers might have to raise the nation’s borrowing limit before the election, a scenario they took pains to avoid in the debt deal passed in August.

Now, partially due to lower than expected tax receipts, the nation could reach the $16.4 trillion debt limit as early as late November, according to an analysis from the Bipartisan Policy Center (BPC) to be released Friday.

Just a few weeks ago, the Center has estimated the debt-limit wouldn’t be reached until the spring of 2013.

But continued sluggishness in the economy, coupled with the recent payroll package that adds to the deficit, is casting doubt on that timeframe, raising the possibility of a bitter fight over deficit spending at the height of a presidential election year.

Last year’s fight over the debt ceiling brought the nation to the brink of default and resulted in the first-ever downgrade of U.S. securities. The last-minute deal to raise the borrowing limit by $2.1 trillion was supposed to tide the government over until the end of 2012, by which point electoral politics would be in the rearview mirror.

But analysts at the BPC said it’s looking increasingly likely that those best-laid plans will be dashed by “unexpected circumstances.”

END_OF_DOCUMENT_TOKEN_TO_BE_REPLACED

[Editor:  This story is from an archive by Conservative Viewpoint (GDMP.net), our original website name.  It was posted directly from: http://www.floppingaces.net.  Today, Rush Limbaugh brought up a Politico posting in which Newt Gingrich was misquoted as bringing up the issue of “partial birth abortion” when, in fact, Newt had brought up an issue for which Barack Obama supported when he was Illinois State senator.  The issue that the Speaker brought up was ‘infanticide’ which has been deemed by some as post birth baby killing by a physician when a baby is born alive after a botched abortion.]

[INFANTICIDE] Caution: The graphic herein may be disturbing to some; Obama supports this!

We are being told that the Obama campaign plans to make a play for the Catholic vote. His margins among them are plummeting. An article by John M. Broder in the New York Times grapples anxiously with the problem. What can Obama do now? Maybe, as a [token] act of atonement, they can allow the younger Robert Casey to address the convention? (For those who don’t remember, Robert Casey Sr., governor of Pennsylvania was NOT allowed to address the convention, because he was pro-life. A lot of Catholics have not forgotten.)

The article even dares to broach the reason for the precipitous drop. In my mind, that can hardly be a question. Barack Obama has the most radical pro-abortion position in Presidential election history and the word is getting out.

How radical is it? Well for one thing, He opposed a ban on the killing of fetuses born alive during abortion in Illinois. Yes, you read that right. (This was started by the experience of a traumatized abortion nurse who was not even allowed to hold a surviving child, but instructed to put ‘it’ in the trash.) From Broder’s article, this was his rationale:

Mr. Obama has said he had opposed the bill because it was poorly drafted and would have threatened the Supreme Court decision in Roe v. Wade that established abortion as a constitutional right. He said he would have voted for a similar bill that passed the United States Senate because it did not have the same constitutional flaw as the Illinois bill.

END_OF_DOCUMENT_TOKEN_TO_BE_REPLACED

Sarah Palin has criticized the ‘lame-stream media’ for making too much of Rick Santorum’s 2008 statement that Satan is attacking America. But the media aren’t the only ones concerned.

Sarah Palin says the lame-stream media are getting all “wee-weed up” about Rick Santorum’s Satan speech. By that, we believe she means the mainstream press is making too much of it. Is she right?

Well, we’ll note here that the media gets wee-weed up about many subjects, because if they don’t, it can be very hard to stay awake during a slow news day. Mr. Santorum’s remarks were made four years ago, in a different context than a presidential race, and are easy to misinterpret if you have a dissimilar religious background.