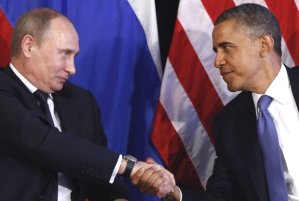 WASHINGTON — How Barack Obama deals with Russia’s invasion of Ukraine will likely define his presidency in the history books. But after five years of coddling Moscow and its brutal authoritarian regime, there’s little confidence left in his leadership.

The immediate reaction among Washington’s top political and media power centers to President Vladimir Putin’s audacious military incursion in Crimea is that it’s the result of Obama’s foreign policy incompetence in an increasingly dangerous world — one in which we face a treacherous foe who thinks the Cold War never ended.

“Obama’s critics assert that this is largely his doing — that his willing acceptance of U.S. retrenchment abroad has opened strategic vacuums into which hostile powers rush and out of which friends tumble. There is some truth in that view,” writes The Washington Post’s veteran foreign policy analyst Jim Hoagland.

The Obama White House, Hoagland added, has failed to adapt to monumental foreign policy changes abroad — “failing to think through the consequences of ‘a world awash in change’ and devise strategies to turn this change to U.S. advantage.

“It has allowed the United States to become a stumbling, status-quo power in a time of global upheaval,” he said.

That’s pretty strong stuff, but it is evident that Obama’s foreign policy and national security team and its record is one of the weakest in recent decades.

Remember the whispered conversation Obama had in the midst of the 2012 election year with Russian President Dmitry Medvedev, seemingly asking him to give Putin a message. “This is my last election. After my election, I have more flexibility,” Obama said with a rhetorical wink and a nod.

Obama won a second term by saying that the terrorist threat from al-Qaida was no more, that their forces had been “decimated” and were “on the run.” It turned out that al-Qaida and their allies were stronger than ever and had spread through the Middle East, into North Africa and far beyond.

Secretary of State Hillary Clinton had been in charge of foreign policy in his first four years, but for all intents and purposes it was on automatic pilot. She seemed far more interested in achieving a travel record than in dealing with any of the stormy trouble spots that worsened during her term.

Then John Kerry took over, only to face Syrian dictator Bashar Assad’s use of chemical weapons against his own people. Obama and Kerry refocused our attention on a Putin-backed deal to supposedly eliminate the weapons (most of which still remain in Syria), as Assad stepped up his deadly attacks on the civilian population, killing thousands of Syrians who were being bombed and starved to death with Putin’s military assistance.

“Look at what (the Russians are) doing in assisting Assad’s slaughter,” Sen. John McCain said this week in a fiery speech in which he said Putin’s aggression in Ukraine was “the ultimate result of a feckless foreign policy where nobody believes in America’s strength anymore.”

That was the very same point made in a recent Post editorial.

“Many in the West did not believe Mr. Putin would dare attempt a military intervention in Ukraine because of the steep potential consequences. That the Russian ruler plunged ahead shows that he doubts Western leaders will respond forcefully,” says the Post. Exactly. And whose fault is that?

If Obama thought lawmakers on Capitol Hill would rally behind him in the aftermath of Putin’s invasion, he was quickly disabused of that notion this week.

“We have a weak and indecisive president that invites aggression,” said GOP Sen. Lindsey Graham of South Carolina.

Russia “is playing chess, and I think we are playing marbles,” Rogers said.

Putin has long maintained that the collapse of the Soviet Union in 1991 remains his greatest regret, and to this day nurtures his dream of a Greater Russia that would include Ukraine and other Soviet bloc nations.

The former KGB agent has ruled Russia with an iron fist, imprisoning opponents and critics on trumped-up charges, and still nurtures a brutal Cold War mentality with an utter hatred of the West and the U.S. especially.

In a telephone conversation with Obama, Germany’s Chancellor Angela Merkel questioned whether Putin “was in touch with reality,” and said he was “living in another world.”

Obama came into office in 2009, naively promising to “reset” future relations with Russia in a new era of hope and change.

“Obama’s reset policy is partly to blame for what is unfolding in Ukraine, after giving Putin a pass on his human rights abuses, aggressive policies toward his neighbors and support for murderous regimes like the one in Syria,” writes David J. Kramer, president of Freedom House and a former deputy assistant secretary of state for Russia and Ukraine in George W. Bush’s administration.

Last month, seven Russians who demonstrated against Putin were sentenced to up to four years in prison. When 200 people protested outside the court building, they were detained, as were another 420 protesters a few days later. Putin’s prisons are filled with his foes.

“All too often, Obama and his team looked the other way. That neglect is coming home to roost in the worst way possible,” Kramer said.

Putin needs to be taught a lesson by the U.S. and the West that he will never forget, including sanctions against state-owned banks, ending all trade negotiations, boycott of the G-8 in Sochi, expelling Russia from that group, an immediate economic aid package to Ukraine, and for good measure, a blistering U.N. condemnation of Putin and his actions, just for starters.

In the meantime, we need to launch a broader, long-overdue re-examination in Congress of Obama’s foreign policy to date that led us to this shameful and sorry state of affairs.