The left-leaning Public Policy Polling does regular weekly polling for the extreme left-leaning Daily Kos and SEIU, and the numbers this morning have probably stopped the hearts of leftists everywhere. Nationally, the poll shows Romney up four, 50-46%. In the swing states, the news is just as bad with Romney up three, 50-47%.

In this particular poll, the movement towards Romney nationally is a net gain of two points. In the swing states, Romney overcame a four-point deficit. Two weeks ago he was losing to Obama, 50-46%. That’s a seven-point shift.

Daily Kos released the daily numbers in this three-day rolling poll. Friday and Saturday averaged out to a tie, but on Sunday, Romney walloped Obama by twelve points — 55-43%. Obviously, that’s a fluke, but the question is, how much of one? Was there a real momentum shift of some kind? Daily Kos claims that nothing in the news can account for this, but that’s debatable.

END_OF_DOCUMENT_TOKEN_TO_BE_REPLACED 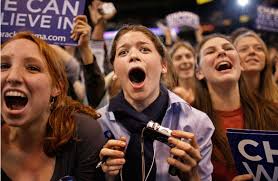 We need to backup and take a moment to collect ourselves. While it is true we have a wounded president who appears all but finished as a one termer, it will not be from lack of support from the Left. I can certainly see the logic in assuming otherwise, however. After all, his presidency has been one big stinker. But if there is one thing that is utterly amazing to witness it is the limitless power of a child’s mind.

In the case when grown-ups possess a child’s mind they become trapped within it. Because grown-ups have things a child does not: Experience and years of living. In other words, liberals willfully reject reality for fantasy. They are irrational, emotional, prone to tantrums and cry out, “but that’s not fair!” when things do not go their way. For a child, that is his only defense against a world he does not understand and is ill-equipped to cope with. For an adult, it is a sickness.