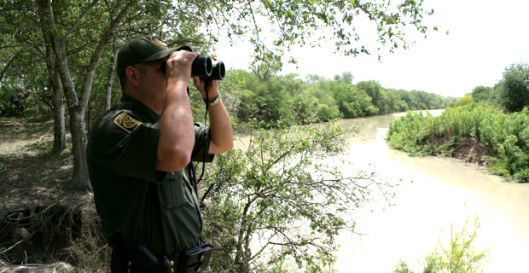 Two Mexican nationals are being charged with the murder of an off-duty Border Patrol agent, who was shot over the weekend while on a fishing trip with his family, reports claim.

END_OF_DOCUMENT_TOKEN_TO_BE_REPLACED

Don’t be surprised if you hear less from John Stanton out of left-wing media in the foreseeable future.

Why? Stanton’s penchant for speaking candidly, as he did yesterday on Bill Press’s radio show about embattled former congressman Jesse Jackson Jr.’s resignation from Congress only weeks after winning re-election.

Press told BuzzFeed’s Washington bureau chief of bumping into Jackson at George Washington University Hospital back in June after Press popped a hernia, Jackson telling Press he was “feeling a little under the weather.”

“The last time anybody saw Jesse Jackson Jr. in this city,” Press added, “and I didn’t realize that was the beginning of a long saga which ended over the weekend when he resigned from the United States Congress. Why?”

END_OF_DOCUMENT_TOKEN_TO_BE_REPLACED

The Department of Homeland Security is being slapped with a scathing federal discrimination suit, which accuses DHS Secretary Janet Napolitano of turning the agency into a woman-run “frat house” where male employees were regularly humiliated and even exiled to the bathrooms, the New York Daily News reports.

The suit was filed by James Hayes Jr., who is now the top Homeland Security official in the New York division. He argues Napolitano gave two of her female friends top positions in Washington, D.C. who then went on to torment male employees.

The women are identified as Dora Schriro, now head of the Department of Corrections in Washington, D.C., and Suzanne Barr, chief of staff for U.S. Immigration and Customs Enforcement (ICE).
END_OF_DOCUMENT_TOKEN_TO_BE_REPLACED

Is liberalism dead? Sean says “I sure hope so.” Founder and Editor of the acclaimed “American Spectator”, R. Emmett Tyrell, Jr. has just come out with a new book “The Death of Liberalism” in which he analyzes the past present and future of liberalism. He contends that liberals have “carried on as a kind of landed aristocracy, gifted but doomed. They dominated the culture and the politics of the country, unchallenged from the beginnings of the Cold War to the first Nixon administration.” What has occurred since? Has the political environment of the United States acted as a warm and fuzzy incubator in which Liberalism could grow, or has the country taken a sharp turn? In the book, Tyrrell advocates the latter, pointing to the fact that since the 2008 elections Democrats have shown their true colors by putting us an additional trillion dollars into debt when faced with an entitlement crisis.

The leader of this decline, President Obama, “is a stealth socialist” and a leader such as Obama creates an unsustainable state because “In the Constitution there is life. There is energy. In statism there is only stagnation and death.” “The good news,” says Tyrrell “is that conservatives always outnumber the liberals and now, in some surveys, they outnumber the moderates.” Tyrrell continued, “The moderates and conservatives have, in truth, been under assault by liberal programs for years, and they are now reasserting themselves.” What is our proof of this? Tyrrell offers, “In the election of 2010, they flipped 20 legislative chambers from Democratic to Republican and gained six governorships.”