The Cajun people of Louisiana are some of my favorite people; at one point in my life, I considered dropping out and joining this group of hard living hedonists, but my straight laced Mennonite indoctrination still had a tenuous hold on my morality. Nearly fifty years have passed since I lived with the Coonass people and I still remember them with fondness.

It is easy to point fingers at the Cajun people, their lifestyle is laid back and lusty, but often those we laugh at are the ones we secretly admire.  For those of us who slave at jobs, careers, and businesses, a life that doesn’t allow us to get upset over trivialities has certain advantages.

I am reminded of two friends down in Bossier Parish Louisiana, they both considered themselves race horse trainers, and indeed, they had the knowledge and judgement to be trainers, but they lacked the initiative and drive to build a race horse business.  They usually spent every Sunday playing checkers on a porch and eating cheese and crackers, while drinking a case of beer.  The secrets of training racehorses were discussed, as well as dubious past wins at the Fairgrounds, Arlington, and Churchill.

Delton was a good card player and had recently won a five year old gelding in a poker game.  He kept the horse under wraps so as not to let his friend Louis know about the horse, and began to get him legged up with early morning gallops.

After a month, he couldn’t contain himself, he walked his Louis out to the barn and showed him the gelding.  Louis liked the horse, but kept his enthusiasm hidden, he said, “He’s a good looking horse, but he needs some groceries and a decent set of shoes.”

Delton replied, “He just started galloping a month ago, and I am waiting until I have a little extra money before I call the dentist and the horse shoe’r.  He will pick up weight, once I get his teeth done.”

Louis said, “More than likely, you’re waiting until you have a good card game.”

Delton just shrugged his shoulders as if to say, “What’s the difference.”

Louis said, “I’ll tell you what, I’ll buy this horse from you for a thousand dollars and do the work he needs to get him ready for a race.”

Delton needed the money to stake himself in an upcoming high stakes poker game, “Well, Louis, you just bought yourself a horse.”

Delton played his cards well during several games, and a few weeks later, he was over at Louis’ place, playing checkers, eating cheese and crackers, and drinking beer.  He noticed the race horse in a turnout and said, “Louis, I be missin my horse; I am here today to buy him back.”

Louis looked with shock at his friend, “Whoa back, there, old buddy, not only do I have 3o days of gallops on this horse, but I got his teeth done and he has a new set of race plates.  He’s doing great, and I expect to win a race in 45 to 60 days.”

Louis, said, without hesitation, “He’s worth $1,800 or you better look for another horse.”

Delton pulled out his wallet and counted out 18 hundred dollar bills.  It was a done deal.

Louis had heard from friends, that Delton had been galloping the horse two miles a day for over a month and had set him down for a 3/8′s of a mile work, and the horse cooled out and wouldn’t have blown out a candle, his breathing was so unlabored.

Louis got his money together and met his buddy for checkers and beer; he told him, he was missing his horse, and needed a horse to train.

Louis got aggravated, he thought he was being setup for a high price, “What do you mean, I am too late?”

Delton explained, “A man from Chicago saw the horse, and offered me $5,000.  I helped him load his new horse on the trailer.”

Louis was mad, “That was the dumbest thing you have ever done!”

Delton said, “What are you talking about, that was good money.”

Louis said, “Don’t you realize, we were making a damn good living with that horse.”

Now, race trackers, especially, Cajun race trackers, can get in some ridiculous business dealings, but if you are gullible enough to see the logic of Louis, you might be an Obama voter, but then again, the logic of an American terrorist in Somalia, uses similar logic.

If we follow the trail of illogic that so often defines the present administration, perhaps the idea of joining our enemies and training them to fight their enemies in Syria and other cess pools around the world, might seem like a good idea; after all, one man’s terrorist is another man’s hero.

By GROVER G. NORQUIST from the SEPTEMBER 2012 issue

THE TAX AND SPEND SPECTATOR

Republicans control 24 states. Where are the rest of our Scott Walkers and Bobby Jindals? 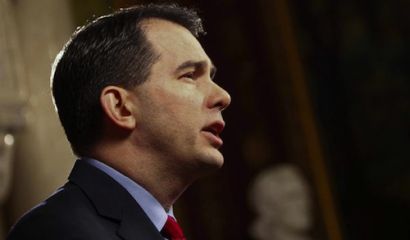 IN LESS THAN TWO YEARS, the governor of Wisconsin has reformed public sector unions so that they can no longer withhold union dues from every worker’s paycheck; ended teacher tenure; required government employee unions to be re-certified each year; signed legislation that made Wisconsin the 41st state with “shall issue” concealed carry; cut over $800 million from the state budget; and expanded parental choice in education by removing the 22,500-student cap on the Milwaukee Parental Choice program and extending the program to include the city of Racine. The governor of Louisiana, elected in 2007 and re-elected last year, has helped usher Republican majorities into the state house and senate; signed legislation that gives more than half of the state’s students (380,000 out of 700,000 total) a voucher for the amount the state government spends per pupil; signed a strict ethics law; and moved government worker pensions to a blend of defined contribution and defined benefit.

END_OF_DOCUMENT_TOKEN_TO_BE_REPLACED

The president’s Sept. 3 visit was announced via a 11:54 a.m. tweet from White House communications director Daniel Pfeiffer. “President Obama will head to Louisiana on Monday to visit damage from Hurricane Isaac,” he tweeted.

Romney’s visit to the storm-damaged state the day after his successful convention speech highlights his aggressive campaign strategy, which seeks to preempts Democratic p.r. offensives.  For example, Romney and his vice presidential pick, Rep. Paul Ryan, have aggressively criticized Obama for damaging Medicare in advance of Democratic efforts to “Mediscare” retirees into voting for Obama.

END_OF_DOCUMENT_TOKEN_TO_BE_REPLACED

Mitt Romney is poised to suffer yet another blow in his march to the Republican presidential nomination this weekend in Louisiana, according new polls from Public Policy Polling and Rasmussen Reports.
A poll released Friday by Public Policy Polling shows Rick Santorum with a double-digit lead over Romney in Louisiana. Some 42 percent of the 650 likely Republican primary voters polled make Santorum their top choice. Mitt Romney is at 28 percent, with Newt Gingrich at 18 percent and Ron Paul at 8 percent.And the PPP poll has Santorum winning the support of voters who identify as “very conservative,” Tea Partiers, and evangelicals. Romney narrowly has the support, 37-33 percent, of voters living in urban areas. The PPP poll has a 3.8 percent margin of error.Another poll released Thursday by Rasmussen Reports gives Santorum a 12-percentage point lead over the former Massachusetts governor.The good news for Santorum came as the candidate tried to walk back comments on Thursday that President Obama might be a better choice than rival Romney. But if it’s not him, his campaign said Friday, Santorum will back whoever it is — and isn’t actually suggesting voters just stick with Obama.
END_OF_DOCUMENT_TOKEN_TO_BE_REPLACED