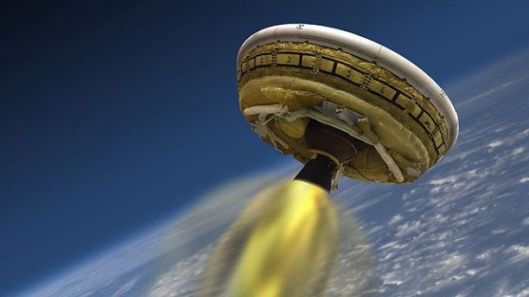 Watch the latest video at video.foxnews.com

NASA will conduct an ambitious test flight of its revolutionary ‘flying saucer’ technology Tuesday as scientists lay the foundations for future Mars missions.

The high altitude test at the U.S. Navy Pacific Missile Range Facility in Kauai, Hawaii, will use a huge balloon to carry the 15-foot wide, 7,000-pound test flying saucer to high altitude. The balloon, roughly the size of three football fields, will lift the flying saucer to 120,000 feet, at which point the vehicle will be released. A booster rocket will then transport the saucer at Mach 4, four times the speed of sound, to a height of 180,000 feet.

END_OF_DOCUMENT_TOKEN_TO_BE_REPLACED

ESA – This graphic depicts the trackable object, satellites and space junk, in orbit around Earth.

There is so much junk in space that collisions could start to increase exponentially, leading to a continuously growing pile of rubble in orbit, a new report warns.

The independent report, released today (Sept. 1), surveyed NASA’s work to meet the threat of space debris. It was sponsored by NASA, and conducted by the National Research Council, a nonprofit science policy organization.

END_OF_DOCUMENT_TOKEN_TO_BE_REPLACED

NASA satellite data from the years 2000 through 2011 show the Earth’s atmosphere is allowing far more heat to be released into space than alarmist computer models have predicted, reports a new study in the peer-reviewed science journal Remote Sensing. The study indicates far less future global warming will occur than United Nations computer models have predicted, and supports prior studies indicating increases in atmospheric carbon dioxide trap far less heat than alarmists have claimed.

“The satellite observations suggest there is much more energy lost to space during and after warming than the climate models show,” Spencer said in a July 26 University of Alabama press release. “There is a huge discrepancy between the data and the forecasts that is especially big over the oceans.”

In addition to finding that far less heat is being trapped than alarmist computer models have predicted, the NASA satellite data show the atmosphere begins shedding heat into space long before United Nations computer models predicted.

The new findings are extremely important and should dramatically alter the global warming debate.

END_OF_DOCUMENT_TOKEN_TO_BE_REPLACED

Google’s growing influence with government is beginning to pay dividends for the company while leaving consumers and taxpayers on the short end of the stick.

Since donating over $1 million to the president’s campaign and building its online presence and fund raising base, the company has reaped continued returns on their investment, so much so, that Google’s former CEO is rumored to be on the shortlist to be the nation’s new Secretary of Commerce.

In order to pad its bottom line, Google made a conscious effort to grow its influence in Washington by hiring insiders and placing Google executives in the Administration. In a short period of time, Google has been rewarded with over 25 contracts with government agencies including the NASA, the Pentagon and the National Security Agency.

END_OF_DOCUMENT_TOKEN_TO_BE_REPLACED

In this image taken from video provided by BP PLC at 12:23 a.m. EDT, Saturday Sept. 4, 2010 Aug. 3, 2010 shows the blowout preventer that failed to stop oil from spewing into the Gulf of Mexico being raised to the surface. The blowout preventer wasn’t expected to reach the surface until Saturday, at which point government investigators will take possession of it.

ON THE GULF OF MEXICO –  A crane hoisted a key piece of oil spill evidence to the surface of the Gulf of Mexico on Saturday, giving investigators their first chance to personally scrutinize the blowout preventer, the massive piece of equipment that failed to stop the gusher four months ago.

It took 29½ hours to lift the 50-foot, 300-ton blowout preventer from a mile beneath the sea to the surface. The five-story high device breached the water’s surface at 6:54 p.m. CDT, and looked largely intact with black stains on the yellow metal.

FBI agents were among the 137 people aboard the Helix Q4000 vessel, taking photos and video of the device. They will escort it back to a NASA facility in Louisiana for analysis.

The AP was the only news outlet with a print reporter and photographer on board the ship.

END_OF_DOCUMENT_TOKEN_TO_BE_REPLACED

HAVE YOU HAD ENOUGH?

AMERICA WILL NOT TOLERATE A USURPER IN THE WHITE HOUSE WHO WANTS TO BRING ISLAMIC LAW TO THE UNITED STATES.  WE HAVE TO FIGHT THIS!!! OBAMA NEEDS TO BE REMOVED FROM OFFICE, he is NOT legitimate; he was BORN IN KENYA!

There often things you hear that, while you’d love to think that they’re true, you don’t allow yourself the luxury of believing. Sometimes they’re plain silly, and sometimes it’s uphill in a politically correct sense. But sometimes events follow such an interesting and distinct course that those apparent frivolities return to your mind and coalesce. And when they do, they’re not so silly any longer.

Let’s begin here (where we will return later)

When President Obama took the stage in Cairo last June, promising a new relationship with the Islamic world, Muslims in America wondered only half-jokingly whether the overture included them

and this is key:

After all, Mr. Obama had kept his distance during the campaign, never visiting an American mosque and describing the false claim that he was Muslim as a “smear” on his Web site.

END_OF_DOCUMENT_TOKEN_TO_BE_REPLACED

NASA Administrator Charles Bolden testifies before the House Science and Technology committee on Capitol Hill in Washington May 26. (Reuters Photo)

Call it a failure to launch.

The White House is disavowing a plan to have NASA conduct outreach to Muslim countries, but a congressman who talked to NASA Administrator Charles Bolden about that plan last month said the initiative was very real until somebody slammed the brakes on it.

Rep. Pete Olson, ranking Republican on the Space and Aeronautics House Subcommittee, told FoxNews.com that Bolden described the outreach program as part of the administration’s space plan during a conversation they had in June.

“He confirmed it to me,” Olson said. The Texas Republican said he thinks the program existed until the “uproar” compelled the administration to rethink it.

END_OF_DOCUMENT_TOKEN_TO_BE_REPLACED Please check out my take on Obama’s Islamic NASA :