As many expected, California’s junior US Senator, Barbara Boxer, has announced she will not seek re-election in 2016. When she departs, the Congress will lose of one its most obnoxious, reflexive Leftists.  Boxer made her intentions official in a playful-ish YouTube video to supporters:

END_OF_DOCUMENT_TOKEN_TO_BE_REPLACED 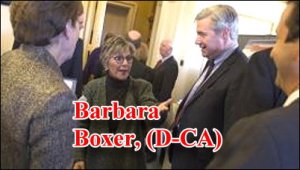 (CNSNews.com) – Democrats control the Senate, but instead of bringing up a Democrat-sponsored climate-change bill, a few dozen of them pulled an all-nigher on the Senate floor to draw attention to the issue.

It’s a clear indication that Democrats don’t have the votes — or the public support — to pass their own climate-change legislation. And they blame the lack of bipartisanship on billionaire Republican donors and “all that dark money,” as one Democrat described it.

END_OF_DOCUMENT_TOKEN_TO_BE_REPLACED

FILE – In this April 29, 2009 file photo Debo Adegbile, then an attorney with the Legal Defense and Educational Fund of the National Association for the Advancement of Colored People speaks outside the Supreme Court in Washington. Adegbile, President Barack Obama’s choice to head the Justice Department’s civil rights division has failed a Senate test vote and his confirmation is in jeopardy. (AP Photo/Alex Brandon, File)

WASHINGTON (AP) — Should a lawyer be disqualified from public service for representing a client like a cop killer? The question arises after the Senate rejected President Barack Obama’s candidate to be the government’s chief civil rights attorney.

END_OF_DOCUMENT_TOKEN_TO_BE_REPLACED

Oct. 8, 2013: House Speaker John Boehner speaks about the ongoing budget battle outside his office on Capitol Hill in Washington.

Republican lawmakers scrambled back to the drawing board late Thursday to modify their plan for a short-term increase in the debt ceiling, after President Obama apparently pushed back on the proposal during a high-stakes White House meeting.

The meeting broke up with no deal announced, despite optimism earlier in the day that the two sides might agree. Senate Democratic Leader Harry Reid also cast doubt on House Speaker John Boehner’s plan. The day ended like it began, with Americans still unsure when the partial government shutdown will end, and the financial markets still uncertain as to whether the country might miss next week’s deadline to raise the debt ceiling.

END_OF_DOCUMENT_TOKEN_TO_BE_REPLACED 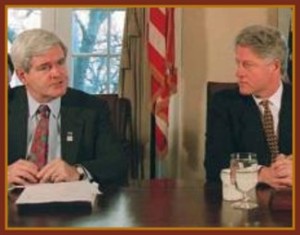 (CNSNews.com) – After the federal government shutdown for 21 days from mid-December 1995 to early January 1996, the percentage of Americans who said they approved of the job Congress was doing increased, according to the Gallup poll.

The government shutdown from Dec. 16, 1995 to Jan. 6, 1996, occurred when the Republican-controlled House of Representatives was trying to get President Clinton to agree to a spending plan that would put the federal government on the path to a balanced budget within seven years.

The Republicans had gained control of Congress in the 1994 elections after President Clinton had tried and failed to enact a national health-care plan that came to be known as Hillarycare–after then-First Lady Hillary Clinton who had led the effort to design the plan and push it through a Democratically controlled Congress.

END_OF_DOCUMENT_TOKEN_TO_BE_REPLACED

After Ted Cruz concluded his hours-long remarks, Senate Majority Leader Harry Reid took to the Senate floor and declared his efforts “a big waste of time.”

“It’s a shame we’ve been standing here [for] perhaps two days,” he said, “most of yesterday and part of today,” when the nation faces a government shutdown.

“That’s what we do around here now,” he continued. “We waste time.”

He also referred to the Tea Party generally as “the new anarchy,” and Tea Party Senators in particular as “anarchists.”

Upon concluding his remarks, he ceded the floor to Senate Minority Leader Mitch McConnell.

Harry Reid is nothing less that a quiet speaking BULLY that just doesn’t get it.  I’m surprised that this man is still at the helm of the Senate.  Well, not that surprised.

Remember the 2010 mid-term, when he was up for re-election?  Dingy Harry Reid had a popularity rating of less than 20%.  It was the unions that came in with “bussed voters” that saved his hide.  Yes, that was very unethical, but that’s what Washington, D. C. is all about now!

What a frickin’ shame!!!

This puts McConnell shoulder-to-shoulder with Sens. Rand Paul (R-KY), Ted Cruz (R-TX), Mike Lee (R-UT), Marco Rubio (R-FL), Jim Inhofe (R-OK), and eight other Senators who have said they will block a push for gun control in the Senate.

McConnell says he now stands with Paul, Cruz, Lee, Rubio, Inhofe, and the other Senators who have vowed to oppose any “motion to proceed to any legislation that will serve as a vehicle for additional gun restrictions.”

Two prominent senators are working toward forging a compromise proposal on expanded background checks, aiming for a breakthrough on the biggest impasse in controversial gun control legislation.

Pennsylvania Republican Sen. Pat Toomey and West Virginia Democratic Sen. Joe Manchin, an influential moderate, are said to be working on a deal that would allow the checks to apply to purchases at gun shows and Internet sales — but, importantly, exempt some sales between hunters or close relatives.

It’s unclear whether such a proposal would be embraced by pro-gun rights conservatives and the National Rifle Association, which so far has opposed the kind of comprehensive firearms legislation pushed by President Obama and his allies in Congress. But the issue of family members and others being subjected to an expanded background check system for sales between them has become an obstacle.

The NRA and other gun-rights advocates, while arguing the checks would eventually lead to a federal gun registry, also said they would be too cumbersome for the two groups – citing faraway trips to government offices and mandatory record keeping. They also say criminals would find ways to avoid the checks.

END_OF_DOCUMENT_TOKEN_TO_BE_REPLACED

Romney To Akin: Step Aside

In a statement just released from the Romney campaign, the new leader of the Republican party has stepped up to lead:

As I said yesterday, Todd Akin’s comments were offensive and wrong and he should very seriously consider what course would be in the best interest of our country. Today, his fellow Missourians urged him to step aside, and I think he should accept their counsel and exit the Senate race.

END_OF_DOCUMENT_TOKEN_TO_BE_REPLACED

The campaigns’ internal polls are, unsurprisingly, contradictory. Dewhurst’s has him up eight points, Cruz’s has him up nine. We need an impartial pollster (impartial as regards this race, at least) to settle this.

This race is one of the most stark examples of the Tea Party movement propelling a candidate that we’ve seen to date. 40% of voters identify themselves as members of that movement and Cruz has a 71-26 advantage with them. Dewhurst leads 57-34 with non-Tea Partiers, and they are 50% of the electorate, but it’s not nearly enough to drown out Cruz’s advantage with that group.

Texas is also an exceptionally rare state where Hispanic voters might be the difference maker in a Republican primary. Cruz has a 78-19 advantage with them…

The large name recognition advantage Dewhurst has enjoyed throughout the campaign has pretty much disappeared. 85% of runoff voters have an opinion about him, and Cruz is not far behind at 81%. We frequently found in our earlier polling that Cruz was winning with voters who knew him, but that he was losing overall because of the name recognition gap. That’s not a problem anymore. Cruz’s net favorability of +31 (56/25) is better than Dewhurst’s +19 (52/33). Since our final pre primary poll Cruz’s net fav has improved by 25 points, while Dewhurst’s has declined by 17.