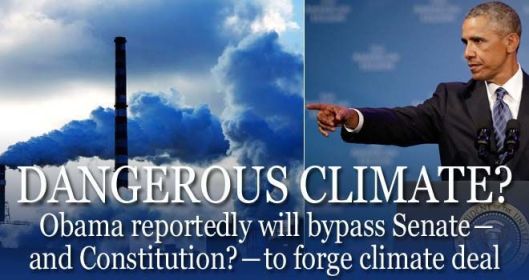 President Obama reportedly plans to do an end-run around Congress to forge an international climate change deal, effectively bypassing the Constitution’s requirement to get the Senate’s approval for a treaty.

The New York Times reported that the agreement is slated to be signed at a United Nations meeting next year in Paris. However, because the U.S. Senate is unlikely to ratify any international climate treaty, Obama’s negotiators reportedly are working toward an alternative agreement – a “politically binding” deal that would serve in lieu of a bona-fide treaty.

END_OF_DOCUMENT_TOKEN_TO_BE_REPLACED

House Republicans were moving on two fronts Friday to dig for answers on Benghazi, with a key committee subpoenaing Secretary of State John Kerry to testify and Speaker John Boehner apparently taking a serious look at appointing a special committee.

One senior House leadership aide told Fox News that Boehner is “seriously considering” appointing such a committee to investigate the attacks, and Rep. Trey Gowdy, R-S.C., could be considered to chair it. Another source said an announcement from GOP leaders could come as early as Friday.

END_OF_DOCUMENT_TOKEN_TO_BE_REPLACED

The Obama administration has now endangered that hallmark of Internet freedom.

The Obama administration has now endangered that hallmark of Internet freedom. – See more at: http://pamelageller.com/2014/03/obamas-internet-surrender-fate-worse-death-internet.html/#sthash.nGYFpFAT.dpuf

Obama’s next offensive in his war on freedom.

Global governance of the internet. “Global governance?” As in the UN? And who and what drives the UN? The largest world body drives the UN. Bat Ye’or describes the OIC this way, “The OIC is one of the largest intergovernmental organizations in the world. It encompasses 56 Muslim states plus the Palestinian Authority. Spread over four continents, it claims to speak in the name of the ummah (the universal Muslim community), which numbers about 1.3 billion. The OIC’s mission is to unite all Muslims worldwide by rooting them in the Koran and the Sunnah — the core of traditional Islamic civilization and values. It aims at strengthening solidarity and cooperation among all its members, in order to protect the interests of Muslims everywhere and to galvanize the ummah into a unified body.”

END_OF_DOCUMENT_TOKEN_TO_BE_REPLACED

Texas Attorney General Greg Abbott has warned the OSCE that its observers risk criminal prosecution if they approach polling stations in the state. (AP Photo/File)

(CNSNews.com) – The head of an international body that will monitor the U.S. elections next month protested to Secretary of State Hillary Clinton Wednesday after Texas’ attorney-general warned that any international observer who approaches a polling station in the state risks criminal prosecution.

“The threat of criminal sanctions … is unacceptable,” said Janez Lenarcic, the Slovenian diplomat who heads the Office for Democratic Institutions and Human Rights (ODIHR), a part of the Organization for Security and Co-operation in Europe (OSCE).

“The United States, like all countries in the OSCE, has an obligation to invite ODIHR observers to observe its elections,” he said in a statement. It added that he “shared his concerns in a letter” to Clinton.

Lenarcic was responding to a letter sent by Texas Attorney General Greg Abbott to the ODIHR Tuesday informing it that “groups and individuals from outside the United States are not allowed to influence or interfere with the election process in Texas.”

END_OF_DOCUMENT_TOKEN_TO_BE_REPLACED

One of the most successful grassroots campaigns during the past year has been the Stop Agenda 21 movement both at the local level and state level. However, we haven’t heard as much about Agenda 21 implementation at the national level.

Of course, there were President Bill Clinton’s establishment of the President’s Council on Sustainable Development by executive order in 1993 and President Obama’s “Federal Leadership in Environmental, Energy, and Economic Performance” executive order in 2009. And, many federal agencies have been incorporating sustainability into various aspects of their organizations. Still, virtually all Stop Agenda 21 grassroots activity has been focused on the local and state levels.

The establishment of Clinton’s President’s Council on Sustainable Development (PCSD) started a pattern of denial by federal government agencies regarding any connection with the United Nations Agenda 21. Even though the PCSD was clearly established in 1993 in support of the UN’s Agenda 21 and its Sustainable Development proposals from the UN’s ’92 Earth Summit in Rio, the PCSD’s statements and documents never referred to the UN and Agenda 21.  We have evidence that federal officials were taking pains to make the PCSD appear to be completely separate from the UN’s Agenda 21 because J. Gary Lawrence, an advisor to the PCSD, said the following in 1998:

END_OF_DOCUMENT_TOKEN_TO_BE_REPLACED

UNITED NATIONS –  The Security Council unanimously approved a resolution Saturday expanding the number of U.N. cease-fire observers in Syria from 30 to 300 and demanding an immediate halt to the violence that has been escalating since the government and opposition agreed to end hostilities over a week ago.

The resolution gives Secretary-General Ban Ki-moon authority to decide when to deploy the additional observers, based on developments on the ground including “the consolidation of the cease-fire.” Ban accused Syrian President Bashar Assad on Thursday of failing to honor the cease-fire, expressing dismay that increased violence is claiming more lives.

The resolution merged rival Russian and European texts and dropped a European threat of non-military sanctions against Syria if it fails to withdraw troops and heavy weapons from towns and cities. Instead, it uses language from the resolution adopted last Saturday authorizing deployment of the 30-strong advance team of observers which expresses the council’s intention to assess implementation of the new resolution “and to consider further steps.”

END_OF_DOCUMENT_TOKEN_TO_BE_REPLACED

The Palestinians were offered statehood in 1948 and rejected it. They also rejected numerous other chances to have it, because they’d never recognize Israel’s right to exist. Palestinian Arabs rejected a state in 1948 because they wanted to destroy Israel utterly

The “occupied territories” of Judea and Samaria and Gaza were under Jordanian and Egyptian rule, respectively, from 1948 to 1967. Why did the Palestinians never complain about “occupation” or clamor for a state during that period?

When Israel withdrew from Gaza we were promised that Gaza would be a place where the Palestinians could live freely and peacefully. Instead, it became another jihad base. A Palestinian state will too, since they have never recognized Israel.

Just weeks after Mahmoud Abbas, leader of the annihilationist movement in Israel, against Israel, said, “We will never recognize Israel as a Jewish state,” yet again ratcheting up the threats and the hate.

END_OF_DOCUMENT_TOKEN_TO_BE_REPLACED

NASA satellite data from the years 2000 through 2011 show the Earth’s atmosphere is allowing far more heat to be released into space than alarmist computer models have predicted, reports a new study in the peer-reviewed science journal Remote Sensing. The study indicates far less future global warming will occur than United Nations computer models have predicted, and supports prior studies indicating increases in atmospheric carbon dioxide trap far less heat than alarmists have claimed.

“The satellite observations suggest there is much more energy lost to space during and after warming than the climate models show,” Spencer said in a July 26 University of Alabama press release. “There is a huge discrepancy between the data and the forecasts that is especially big over the oceans.”

In addition to finding that far less heat is being trapped than alarmist computer models have predicted, the NASA satellite data show the atmosphere begins shedding heat into space long before United Nations computer models predicted.

The new findings are extremely important and should dramatically alter the global warming debate.

END_OF_DOCUMENT_TOKEN_TO_BE_REPLACED

AP2011 – Mahmoud Jibril, representative for foreign affairs with the Libyan Transitional National Council, a political group opposed to the regime of Moammar Gadhafi, listens during a news conference in Washington, Wednesday, May 11. 2011.

As a congressional deadline on military action in Libya looms next Friday, and both Republicans and Democrats on Capitol Hill question the mission, the situation on the ground is at a stalemate two months after the conflict started.

President Obama, through his constitutional authority with the War Powers Act, gave the go-ahead for the Libyan mission, which included military support on a United Nations resolution enforcing a no-fly zone. The administration however does not classify the conflict as a “war.”

END_OF_DOCUMENT_TOKEN_TO_BE_REPLACED

At least two sons of Muammar al-Qaddafi are reportedly proposing a resolution to the ongoing Libyan conflict that would push their father aside to make way for a transition to a constitutional democracy, a diplomat and a Libyan official said Sunday.

It’s not immediately clear whether Qaddafi, 68, backs the proposal by his sons, Seif and Saadi al-Qaddafi, although one person close to the son told the New York Times that the father appeared willing to go along with the plan.