This weekend, sixteen national sororities prohibited their female members at the University of Virginia from attending annual fraternity bid events for the girls’ own safety, in the aftermath of a false Rolling Stone report on a fraternity gang rape that never actually happened. Some sororities even mandated “Girls Night In” policies, whereby the sorority members barricaded themselves indoors where they watched television and possibly, theoretically also made out.

In that spirit, I’m also taking every precaution to protect people I care about from the constant danger posed by Differently-Gendered Americans. So I’ve sent out to my young male friends a similar mandate: avoid progressive women for your own safety. Seriously. The risks are real.

END_OF_DOCUMENT_TOKEN_TO_BE_REPLACED

President Barack Obama has a resolution for the New Year and the Republican-controlled Congress convening next week in Washington: Cooperate more and use executive actions less.

Obama has already used some quite extensive executive actions, including a decree on immigration reform, reports The Wall Street Journal, but he still has some top agenda items left to achieve during his last two years in office.

Some senior administration officials say that those priorities might stand a better chance of happening without Democrats in charge of the Senate.

But the six years since Obama first took office have been contentious ones, and while Republican leaders say they want to work with the president, aides told The Journal that the leaders don’t believe he’ll compromise with them.

END_OF_DOCUMENT_TOKEN_TO_BE_REPLACED 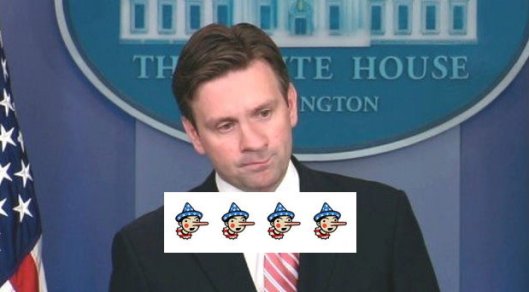 Washington Post Fact Checker Glenn Kessler took aim at White House Press Secretary Josh Earnest on Wednesday, September 3 and the result wasn’t pretty. At issue was Earnest’s attempt to clarify remarks made by President Obama during an interview in January where he labeled the terrorist group ISIS as a “JV” team.

Despite the press secretary’s best efforts to argue that Obama was “not singling out ISIS” when he called them “JV”, Kessler made clear that nothing could be further from the truth and gave Earnest four Pinocchios for his efforts.

END_OF_DOCUMENT_TOKEN_TO_BE_REPLACED

Joseph Miller is the pen name for a ranking Department of Defense official with a background in U.S. special operations and combat experience in Iraq and Afghanistan. He has worked in strategic planning.

On Wednesday, the White House leaked a classified special forces operation to rescue American hostages in Syria. The reason: political cover. The cost: so far, unknown.

But this much, we know: The politicized leak of this operation cut through the fog of war to let our enemies know exactly what happened that day in the desert, and because of that, future attempts to free American hostages will be more difficult to plan, farther between, and more dangerous to carry out.

END_OF_DOCUMENT_TOKEN_TO_BE_REPLACED

The Washington Times reported on Tuesday that:

Talk of impeachment was cooked up by a White House desperate for something to rally Democrats ahead of November’s elections, House Speaker John A. Boehner said Tuesday, flatly ruling out any action on the controversial suggestion.

“We have no plans to impeach the president. We have no future plans,” Mr. Beohner said. “Listen, it’s all a scam started by Democrats at the White House.”

But PJM’s own Andrew McCarthy, a former federal prosecutor, has a very different take, both in terms of Mr. Obama, and of the general concept of impeachment itself.

END_OF_DOCUMENT_TOKEN_TO_BE_REPLACED

While the Obama administration tortures the Benghazi raid suspect into a false confession that a YouTube video made him attack our embassy, let’s review what his “capture” is meant to distract us from:

(1) The IRS’ Lois Lerner claims her computer crashed, destroying all her emails to the White House, congressional Democrats and the Department of Justice, at the very height of the IRS’ targeting of tea party groups. Six other IRS officials now claim their emails are also missing. (Have they tried shutting down their computers and restarting?)

Rosemary Woods erased part of a White House tape nearly half a century ago, and Chris Matthews is still talking about it.

END_OF_DOCUMENT_TOKEN_TO_BE_REPLACED

Liberal MSNBC host Chris Matthews continued his attacks on the Obama administration for the trade of five dangerous Taliban prisoners for Army Sgt. Bowe Bergdahl, slamming the White House’s claim that soldiers who served with Bergdahl are “swift-boating” him and asking “where is the dishonesty in the portrayal?” of Bergdahl as a deserter.

Matthews, who strongly questioned the trade even while facts continued to pour in on Monday, has been the only host on his network so far to even remotely challenge the Obama administration’s narrative on the prisoner trade and Bergdahl’s history of service.

And on Wednesday, he angrily rejected the characterization by Obama aides that the right-wing and Bergdahl’s former comrades were “swift-boating” the Army Sgt. — a reference to attacks made by then-presidential candidate John Kerry’s fellow servicemen on his record during his deployment in the Vietnam War.

END_OF_DOCUMENT_TOKEN_TO_BE_REPLACED

As one of the characters in “Anchorman” observed of its bloody brawl between news teams: Boy, that escalated quickly.  I mean, that really got out of hand fast.

Two days after President Obama broke the law to arrange an insanely reckless swap of five incredibly dangerous Taliban terrorists for captive American Sgt. Bowe Bergdahl, virtually every aspect of the deal has blown up in Obama’s face, and the whole thing has soured into another five-star scandal for an Administration riddled with them.  Maybe it’s the accumulated weight of Obama fatigue, or the sheer stupidity and arrogance the President displayed in this particular abuse of power, but even people who stood by him through Fast and Furious, Benghazi, and the IRS scandal are asking: What the hell was he thinking?  What did the White House think was going to happen here?

I think the Administration’s crucial error was expecting the military to shut up and let them write the story.  That didn’t happen.  Troops who served with Bergdahl have been speaking out, and they’re not mincing words.  They’re especially angry about the lives lost in search missions conducted after Bergdahl walked away from his post.  ”I was pissed of then, and I am even more so now with everything going on,” former Sgt. Matt Vierkant told CNN.  ”Bowe Bergdahl deserted during a time of war, and his fellow Americans lost their lives searching for him.”

END_OF_DOCUMENT_TOKEN_TO_BE_REPLACED 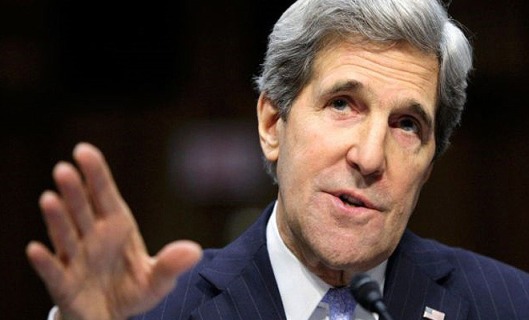 If Darrell Issa expected John Kerry to abide by a subpoena in the issue of e-mails withheld by the White House on Benghazi, the State Department wants to temper those expectations. Earlier today, spokesperson Jen Psaki offered a suggestion to the House Oversight Committee — find someone “more appropriate” for such testimony:

The State Department is doubling down on its opposition to Secretary of State John Kerry testifying on the deadly Benghazi attack, saying in a statement overnight that a congressional committee should find “a more appropriate witness.”

Kerry will be on a previously scheduled official trip to Mexico on May 21, the day the House Oversight and Government Reform Committee subpoenaed him to testify, State spokeswoman Jen Psaki said in the statement.

END_OF_DOCUMENT_TOKEN_TO_BE_REPLACED

House Republicans were moving on two fronts Friday to dig for answers on Benghazi, with a key committee subpoenaing Secretary of State John Kerry to testify and Speaker John Boehner apparently taking a serious look at appointing a special committee.

One senior House leadership aide told Fox News that Boehner is “seriously considering” appointing such a committee to investigate the attacks, and Rep. Trey Gowdy, R-S.C., could be considered to chair it. Another source said an announcement from GOP leaders could come as early as Friday.